The world is full of cheap guitars. Number one priority seems to be “cheap” or “cheapest” at any cost. That tendency of making, finding, selling and buying the cheapest possible guitars has made companies around the world manufacturing products in the most remotes, less regulated areas of the globe with the only aim of making things cheaper and more profitable.

After few decades doing the same thing, our planet is showing clear signs of stress and damage, not only for our guitars of course but because the same principles are applied to any consumer products. The word sustainability  has become very popular and even fashionable but the concept still far from been generally accepted, particularly from big companies that do not want to leave the race of cheap price and from governments that don’t want to face the future and only see the immediate profit and growth.

This maxim also applies to the world of guitar making. The biggest guitar companies make guitars in countries where the lack of regulations allow them to manufacture instruments with very little respect for the environment. From the selection of unregulated timber to the actual manufacturing process where no recycling of dangerous chemicals involved in the varnishing or glueing is done.

“Alhambra is committed to the preservation of the environment whilst going about its daily tasks. It is not a matter of image but a need for survival as our main raw material is wood and our future depends on the sustainability of the world’s resources.”

“All our wood suppliers are companies with a proven track record with most of them committed to reforestation. Depending on the origin of the woods every supplier abides by set rules. For instance our Indian Rosewood is obtained through public government auctions and the trunks are then cut up at source. Another example is our Ebony supplier who must contribute annually a percentage of his turnover to the government who then allocates it for reforestation.” 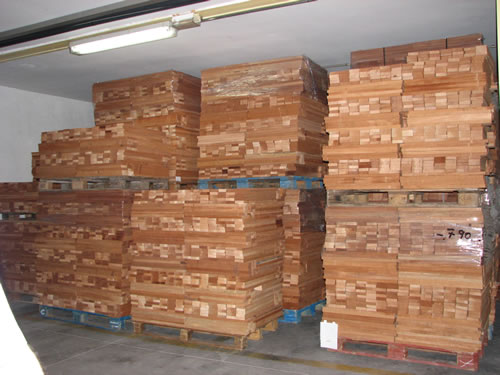 How to minimize the waste and optimize the best use of woods.

“We always try to take full advantage of the options available for the maximum usage of the wood we buy. For that reason, our policy is present in several points:

“We are always seeking ways to assist the environment. This is why we work in collaboration with specialists in the field of varnishing in order to develop new varnishing techniques. Every week our varnishing plant is cleaned and the water is treated through a closed circuit. After the treatment in our water purification plant is completed the water is re-used. Alhambra was a pioneer in this process long before it was made compulsory by law. Regular checks are made to ensure we fulfil the council’s regulations.”

“After the varnishing process the residue in the containers is collected once a month by a special company authorised by the official environment authority for safe disposal.”

Protected woods and our co-operation with the authorities.

“After the 8th meeting of CITES (convention of international trade of endangered species of wild fauna and flora) which took place in Japan in 1992, Dalbergia Nigra (Brazilian Rosewood) was declared an endangered species.

In order to make an inventory a questionnaire was sent to all members of the industry requesting details of their stocks of wood. At the time of the questionnaire Alhambra stock stood at 879 sets of Dalbergia Nigra and 22 guitars in process. Every time Alhambra makes a guitar using Dalbergia Nigra a form must be submitted so that it may be recorded.

As a result of this co-operation and collaboration the civil servants have become familiar with the different parts of the guitar and the woods used to build them.”

Maderas Barber (Paterna – Valencia – Spain) is one of the main wood suppliers for the  majority of spanish guitar manufacturers and probably the biggest guitar wood suppliers in the world. This company has been is business since 1957 its specialized in all king of wood for guitars and its certified by the FOREST STEWARDSHIP COUNCIL Certificate Registration Code: SW-COC-004960.

Next time you buy a guitar think about where that wood may come from and under which conditions.