Two months ago one of our clients asked us: have you got a Fretless classical guitar with MIDI? Of course we didn’t had such a thing but my answer was, let me ask Raimundo. Raimundo guitars makes wonderful classical and flamenco MIDI guitars but they did not make Fretless guitars, so I asked Victor Raimundo if they could make a fretless guitar based in one of their classical models with MIDI.

I know very well that Victor likes the challenge and its not the first time I have asked him and his team to make customized guitars for our clients so his answer was: let me do some tests and i will see if we can make it.

Few days later he came back to me with a positive answer. He was willing to make the guitar. Not only that, he said, I will make two. One for you and one for us and we will show it to the public in music fairs.

Two months later we received the Raimundo 660 MIDI Fretless. The guitar arrived very late that night and we were about to close our offices but I could not resist to open the box and see the result. The first impression was Wow!. What a great job. Of course, I know the standard model Raimundo 660 MIDI and I know very well its a fantastic cutaway classical guitar. I also know the MIDI version and the RMC System IV MIDI Pickup which works beautifully in this guitar but I wanted to see the fretless fretboard of this guitar with maple insertions where the frets should be and with maple dots along the sides of the fretboard. Beautiful craftsmanship and fantastic result. 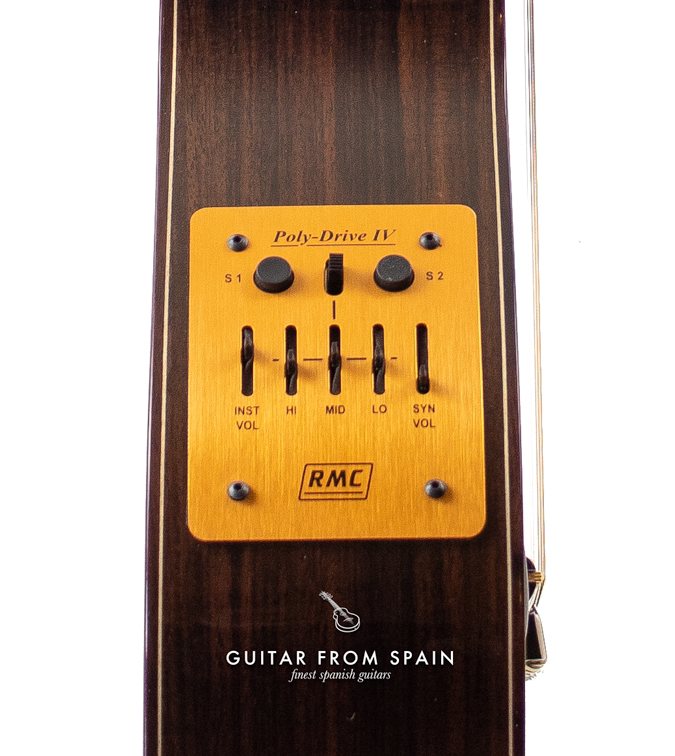 One of my fears was if the guitar without frets would loose volume and clarity but as soon as I started playing my fears dissipated. The guitar sounded as good as expected. Chords are a little bit tricky in this guitar as you have to place every finger in the exact position of the fret marks but I suppose that a fretless guitar is not intended for playing chords. Playing solos and melodies is a real joy as you can glide the notes along the fretboard like a dream without the fret noises. Imagine playing lead solos connected to a synthesizer flying over the fretboard.

Its going to be hard to say goodbye to a such a lovely guitar, but its owner is anxiously waiting for it at the other side of the Atlantic. Once more I have to say thank you to Victor Raimundo and his team for been adventurous and providing great and innovative alternatives based on traditionally hand made instruments like the ones they make with such mastery. Maybe you have something in mind. Do not hesitate to contact us.